The venture capital's business model is to invest into and sell companies, making several times in the process.

To fund an investment, venture funds rely on its limited partners for their capital. There are many types of organizations and individuals who are pertained to fund risks imposed by VC industry.

Organizations such as pension funds, insurance companies do it for the sake of diversification of their cash portfolios. Corporates are mainly seeking interesting monetizable ideas and try to bolster innovation within them.

As for the individual investors, they are typically founders of an IT company, CXOs of a large enterprises and VCs themselves, all of whom are driven by many different factors, some of which at times are highly emotional.

Despite such broad range of decision making people, what LPs seek in venture fund quite overlaps.

Venture capital is a transactional business, so many fund managers are either long-time investment bankers or successful entrepreneurs who turned angel investors and progressed to managing external capital.

Whether it is a lengthy career at an investment bank, building a successful business or managing large technological organizations a requirement for a fund manager is to show his time endurance.

VC are businesses and need to be run as such. Similar to investing in startups, execution of the business plan requires a full range of operational expertise. Important aspects for VC operations include the ability to structure deals, negotiate terms, and allocatate of capital.

LPs need to evaluate how well-oiled the operations are at a VC before investing in abstract ideas or technologies that are hard for the layman to understand.

VC is a marathon business with capital locked in for a decade, key fund personnel must show its historical time commitments and vast expertise to it stakeholders.

There are thousands of funds globally, yet only a fraction of funds actually earn significant upside on LP commitments.

In reality, VCs have only one variable they can really control and that is entry-point valuation. At the end of the day, you either negotiate and get what you want or you pass. At the early stages, after cash has been disbursed to the company, there is not much a VC can influence: strategy and execution are controlled by the founder, timing and size of an exit (if happened at all) are also generally out of VC's control.

Legal instruments such as liquidation preference/ratchets/drag rights can and do get employed to mitigate undesired valuation gaps and to gain downside protection, but start-ups are valued for their immense growth opportunity and when growth stops or one of the founders shifts to a different start-up the value usually plummets, very rarely returning anything back even to VCs.

To protect themselves, VC impose certain rights and require great detail of information transparency so a VC can decide if it's time to add more fuel or pull the plug. Getting negative control rights can significantly affect bargaining power of VC and has a direct role in at least preserving capital.

Spray-and-pray approach also has its merits, by not spending time with the company VCs limit their exposure to failure and can try focus only on winners.

It is key for an LP to understand if the fund manager can succesfully execute on its business model to achieve long-term gains.

Track record and network go together. Venture capital firms with the best track records inherently cast the widest net by being in high demand from capital raising entrepreneurs.

It is not enough to close deals, even hyped one. At the end of the day, people expect positive return, better than stock market (which for S&P500 over the last 100 years was around 11% according NYU ), as statups are posed to higher growth and also should be compensated for absence of liquidity.

Every market is different in terms of VC's liquidity for startups, but one thing for certain is when a company grows >3-4x y-o-y, it is the company that decides whose investment they are to accept. Founders choose their VC partner typically for next 3-10 years and the ability of a fund manager to persuade and offer more value-add (or sometimes just be a less of a pain) vs competition to win the deal given same valuation is an important skill.

You will understand that you've reached it when a startup is willing to write you warrants for some potential bizdev / fundraising / industry insights. On about dozen I was envolved I've seen that twice.

Proven ability to return at least invested capital back to LPs is a must. As famous quote from Warren Buffer: "Rule No. 1 : Never lose money. Rule No. 2 : Never forget Rule No. 1."

As mentioned above, different LPs invest for different reason and same goes for syneriges they are seeking to obtain for themselves.

In most countries, VC industry returns less capital back than it consumes, however, it also acts a pipeline for later stage investing such as private funds / mezzanine fund or even venture debt. Large institutional LPs have a big exposure to former types risks and invest into VCs as feedstock for later stage ecosystem.

Proven traction on raising further capital from selected pool of larger VCs / PE fund can land you an institutional LP.

Looking back 15 years ago or even 5 years back, among the top 5 most capitalized stocks there was generally only 1 technology company. Nowadays, all of them are.

To cope with such major value shift from traditional economy to technology, many large enterprises launched corporate venture funds. Activities with participation with Corporate Venture Capital (CVC) funds in USA trippled in last 10 years to over USD30bn per annum) 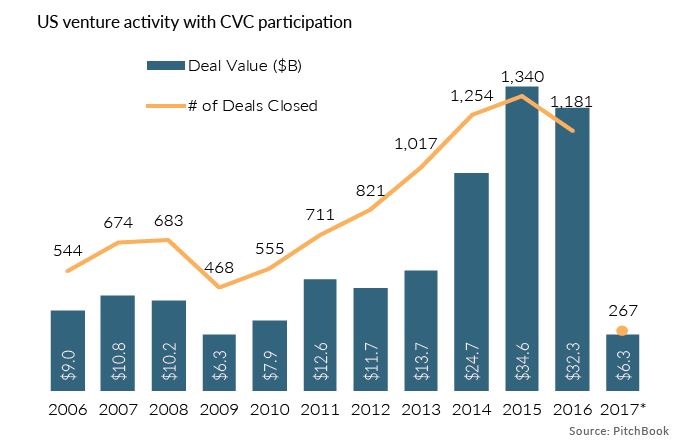 Despite that in M&A it was proven that over 70% of deals overestimate synergies, it is the still one of the key drivers of M&A.

The secret to success in business is synergy. - Farshad Asl

Tuning your pitch to different LPs will maximize your fundraising success.