One of the most asked questions from pitching start-ups is how do we arrive a the valuation of the companies we invest in.

Before we dive in deeper, let's quickly walk through the VC's business model.

By investing US$ X mln @ US$ Y mln the investor's ownership leads to S = X / (Y + X), conditional no dilution happens along the way. Even though the business model sounds rather simplistic here's how the VC industry in the US has performed since 1989 to 2010. Only a dozen or so funds were able to show consistent returns which beat the equity market.

The equation above runs on 3 variables:

There is also a fourth variable, the dilution effect of the initial ownership due to further company fundraising, but we'll leave it for now.

Size of the investment:

The size of the round is usually pre-defined by the current stage of the company. In the software space:

The round size in any given class surely differs by company's industry and sector, but the investment is typically enough to get the company to its next milestone.

In reality, the size of the round is typically determined by the entrepreneurs to execute their desired strategy rather than by VCs .

The exit valuation is another variable that is out of VC control for several reasons:

Which brings us down to the last parameter.

The traditional valuation methods are well described here and include the following:

All of the above work great on established companies with more or less forecastable P&Ls.

So, in reality, it only leaves comparable company analysis.

The are 2 ways to go here, which basically depends if the company turned its monetization switch.

Such approach is also applied to the product's region as the numbers could greatly differ across the globe: from >US$10 in USA vs ca. US$1 in rest of world.

In a case of Twitter, despite the daily time spent on the app is similar to Facebook, Twitter's revenue is almost 2.5x less due to media real estate being utilized much less.

Basically, it all depends on website's ability to retain user's attention: 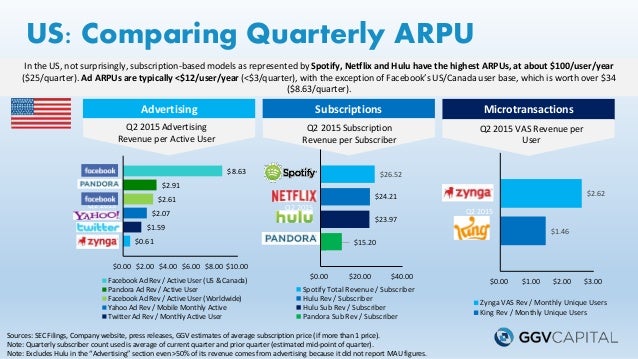 The base scenario to assess the advertising monetization potential of a start-up is to use ARPU in a range of USD 1-2 per annum per active user.

Subscription services are harder to believe in as there is just no churn stats, so even if we believe the product is appealing to its audience, we would use only a small percent of it with a low LTV from such a subscriber.

The goal of the exercise is to assess how the industry is valuing specific verticals and apply a similar multiple to the start-up revenue adjusted for growth. It varies greatly even within specific industry, yet still gives a good indication on where the public market perceives the fair value of an asset.

All in all: the dark-side of the valuation

With all being said, given the vast amount of input parameters how do you come with a number when you ready to bid.

Step 1: Assess where the company's revenue will be in 5-7 years if everything goes according to plan.

Step 2: Use today's broad industry multiple to estimate how much such a company can be worth as start-up will grow matures. Future deterioration on the multiple should be considered here.

Step 3: Calculate the present value of such an Exit.

So here is an example:

Consider a company with USD 3m revenue in an enterprise software business growing 3x in the last two years.

Step 2: Established enterprise business with slower growth are traded at 3 P/S, so this gives an Enterprise Value of USD 50*3 = USD 150m.

Step 3: VC fund's risk profile is to make 3x net return on initial capital, so with some investment to hit rock bottom, the initial target is to return at least 5-10x which is equivalent to a target IRR of 50-80% over that year period.

Such a scenario excludes the dilution due to further funding being raised to achieve such growth. So if in a likely scenario couple more rounds of capital are required, the stake would be diluted by another 30-40% and the valuation would go down to ca. US10 mln.

Step 4: Based on today's revenue we arrive at a range of USD 10 - 16m or 3.3 - 5.3 based on current revenue multiple. There are a few factors which could offset the by a premium or a discount.

Valuing an asset looks like an art and it is with a little bit of math and probability theory in it. The fair price of an asset is what the market perceives it to be, so if a start-up company received an offer, that's where the market is. During fund raising the market can be either many bids from one fund or bunch of bids from many. It's up to the founder to create a market liquidity for his asset via a compelling story and actual results.